What’s the difference between a growth mindset and a fixed mindset?

What are the twin flame signs and symptoms?

What are the twin flame signs and symptoms?

What Is The Twin Flame Numerology?

What Is The Twin Flame Numerology?

How to Achieve Mindfulness Meditation Practice?

How to Achieve Mindfulness Meditation Practice?

The “Magical” Science Behind Understanding The Law of Attraction

The “Magical” Science Behind Understanding The Law of Attraction

What Is The Money Manifestation Meditation To Get Money?

What Is The Money Manifestation Meditation To Get Money?

10 Common Conversation Mistakes and How to Avoid Them

10 Common Conversation Mistakes and How to Avoid Them

Intelligence, skills, and talents are seen as learnable and capable of development via effort by someone with a growth mindset. A fixed mindset, on the other hand, sees those same features as intrinsically stable and immutable across time. 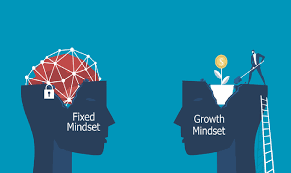 They believe that their inherent nature decides whether or not they are good or bad at anything. People with a fixed mindset, such as “I’m a born soccer player” or “I’m just no good at soccer,” might claim their athletic ability cannot be improved.

A person with a growth mindset believes that their intelligence and talents can be improved through time. It’s easy to believe you’ll never be good at anything if you’ve got a fixed mindset about your intelligence.

Growth vs Fixed Mindsets for Life

Our brains were always thought to cease expanding in childhood, but new research shows that this is not the case. Education has the potential to alter the “software” in our brains in a variety of ways.

Others feel that one’s natural talents and “smarts” can’t be improved upon, despite the neurological evidence to the contrary Stanford University psychology professor Carol Dweck was the first to study fixed and developing mindsets.

In her book growth mindset, Dr. Dweck established two basic ways in which people think about intelligence or ability:

They don’t have to feel guilty or strive to show they’re brighter than others because they have the development mindset and recognize that not knowing or being outstanding at something might be a transitory state.

Dweck says that “children know that their abilities and capacities may be expanded by work, competent instruction, and perseverance” with a growth mindset.

Definition of A Growth Mindset

Intelligence and talent, according to a growth mindset, are attributes that may be cultivated through time.

That doesn’t mean those with a growth mindset think they can become Einstein; there are still a lot of unknowns when it comes to what we can achieve. Growing in intelligence and ability is seen as attainable by those who have a growth mindset.

People with a growth mindset understand that failures are a necessary part of the learning process and that they can “bounce back” by putting in more effort.
Learning, resilience, motivation, and performance all benefit from a growth mindset that views setbacks as transient and changeable.

Development-minded people are more inclined to:

Definition of A Fixed Mindset

In other words, those who have a fixed view of the world believe that their innate abilities, such as their ability and intelligence, are predetermined at birth.

Avoiding challenges, quitting fast, and being afraid or intimidated by other people’s achievements are all characteristics of fixed-minded. Due in part to a fixed mentality, intelligence and talent are seen as innate rather than developed.

Fixed mindsets may lead to negative thinking. Because of their entrenched mindset, some people feel that a lack of intellect is to blame for their failures. Development-minded people may think they need to practice more when they fail at the same activity.

Fixed-minded individuals believe that no amount of effort will be able to change certain characteristics and are hence more likely to:

Who identified the growth and fixed mindset?

It was Stanford University psychologist Dr. Carol Dweck who first introduced her concept of the development mindset. In her groundbreaking research, Dweck examined the reasons why some people fail and others succeed.

High school pupils were asked to solve a variety of issues, from easy to sophisticated, as part of a study. To the surprise of scientists, a group of students embraced failure and used it to their advantage, adopting a mindset that Carol Dweck later dubbed the “growth mindset.”

Developing a development mindset takes effort, but it should not be the primary focus of praise. A person’s self-improvement and education should be a top priority. When you finish a project, give yourself credit for your “excellent effort,” but also look for ways to do it better the next time—so that you may feel good now and in the future.

Please log in again. The login page will open in a new tab. After logging in you can close it and return to this page.